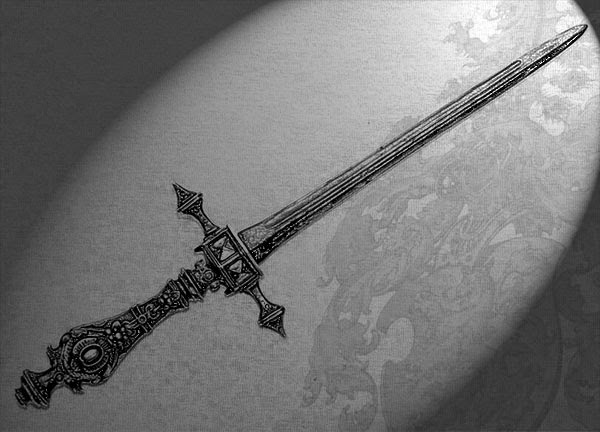 It was a forbidden passion; one that the cold countenance of the executioner’s block gates to forgiveness. Every time she passed him in the corridor, or sent for him to do the kingdom’s bidding, his severed soul ached. She would look at him with her eternal eyes—perhaps another lifetime they were united, but not this one.

Without question, he leaped and her bidding be done.

“Guard! Present!” Like tongues of flames spreading from the mouth of a dragon, the King’s regiment billowed into the Court and took their positions with deadly precision.

Lucien strode three steps across the chamber and fell to one knee in front of her. She glided slowly around him, and placed her hand between his shoulder blades. The room took a collective gasp as he quietly shivered.

“Rise, my most trusted Captain.” He did. She stepped in front of him, looking up.

“My lady-“ Lucien began to protest.

“Shhh.” Her eyes met his. She glanced down and his eyes followed. She held a jewel-encrusted dagger emblazoned with The Royal Hapsburg Crest, hilt towards him.

“My lady! No!” Lucien screamed a horrible whisper.

“I dreamt that our next life was radiant. Please, Luc, I beg you. The end for you would come just as quickly.” Her eyes welled.

Lucien quivered. How could he?

Lucien looked around at the confusion in the court. His Second’s eyes narrowed and reached for the hilt of his sword. Lucien turned to look back at the Queen.

“Mariana. You are my light.” He whimpered.

Tears streaked down her face.