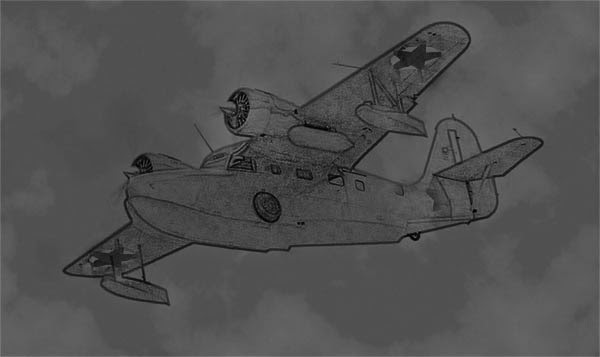 Turbulance hit us hard enough that my stomach felt like it shot straight above me.

“Watch it, Meang! The crates are flying all over back here!” Reggie screeched as he wiped blood away from his forehead.

Stonefaced, Meang banked the Grumman Goose through the boiling clouds. Perspiration bulleted from his forehead as his breath continued to fog the canopy.

I unbuckled and headed to the main hold. Though we were in a tough two prop amphibian, I was rambling some Hail Mary’s to keep the cyclone from shredding us like an aluminum duck.

“C’mon,” I grunted, “let’s refasten this- the strap broke loose.”

Reggie heaved a heavy crate onto the top of the pile. Another jolt of the angry storm threw him against the bulkhead forcing him to lose his grip.  The wooden crate fell right onto his shin, shattering his leg with a gut-wrenching, pulpy crunch before it shattered against the floor.

“Good God!” He screamed. I hopped over to look and saw the abnormal angle his shin took. It started spotting red through his pant leg.

“Damn it, Reggie, hold still-“ I grabbed two of the planks and some left over rope. I had to set it quickly while he was going into shock.

Reggie howled with agony as I managed to quickly set his leg.  His moaning stopped. I looked up and saw his head dangling onto his chest. I checked for a pulse, still beating.

“Sweet dreams, princess.” I huffed as I was wrapping the makeshift splint. While tying off the rope I happened to glance down and saw AK-47s all over the floor. Not good, those weren’t on the roster.

“I’m very sorry you saw those.” I looked up to see Meang twisted around in his seat and pointing a Luger at me.

Just then the plane took huge hit of turbulence- Meang jumped around and tried to pull up on the controls. Luckily, gravity threw me behind his seat. I grappled him into a choke hold with my left arm while I clawed at the Luger with my right.

The little bugger was much stronger that I anticipated. His wiry frame hid muscles like twisted steel cable. Then the clever bastard rolled the plane throwing me onto the ceiling. I’m pretty sure my head split open when it hit the corner of the radio transmitter.