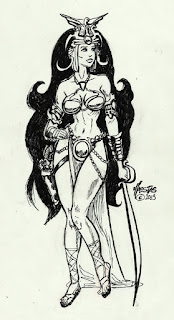 DEJAH THORIS, PRINCESS OF MARS
Well, here she is again. I drew it much smaller then the last one, but refined her costume a little. Not as much detail or time on the face... and I need to work on drawing feet!

I'll update this post with what pen tools I used soon.

In anycase, I've mostly figured out her design. I have Dejah Thoris, now it's time to draw John Carter, Warlord of Mars!

COMICVINE
So, I decided that for the #100 contest should be OMEGA RED. He has been one of my favorite villains since Jim Lee drew him over 20 years ago. Omega Red is due March 12th.

I'm also attempting a cyborg contest on the forum- that one is due on March 8th. I'm still trying to think of something to do.