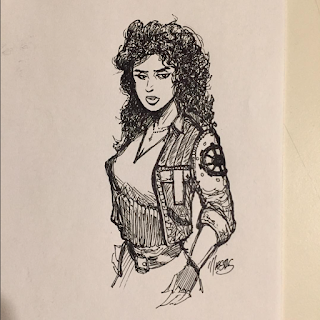 I’ve been thinking about what got me into graphic design and illustration in the first place. Although I’ve always liked to draw and write, the friends that I had and their interests are what cemented my future endeavors.

It started with FASA’s Dr. Who RPG back in mid-1980s Jr. High. It was actually my first taste of role-playing, and we eventually worked up into AD&D 2nd edition. It inspired me- I couldn’t afford all these games. What if I made my own? My friends tried talking me out of it, but I wasn’t deterred. I started designing my first table top- a horrible space fleet tactical game that relied on rulers and hundreds of dice that kept hit point scores. I drew space ships on pieces of cardboard, and despite the lousy game play, I had fun spending hours designing it. It was my first real experience with creative flow.

By the time I hit 10th grade, I met my best friend, Bobby Hancock. He also had a space fleet game- arguably better than mine. We were also trying out roleplaying rules and my first RPG- “Starkillers” was borne. Yes, I had taken the name from Star Wars- but Lucas wasn’t doing much with any of that stuff in 1988- unless you count West End’s Star Wars RPG line (of which I own many books and started the entire Legends expanded universe… but I digress).

“Starkillers RPG” evolved into another game, which is shelved (and has been retitled, btw- for later public release). As I was building that game, I was teaching myself the fundamentals of graphic design and drawing to fill the universe. I had just graduated high school, and had zero prospects. To be honest, I didn’t know I was building the foundation of a future career.

Pushed into going to apply at Salt Lake Community College by my girlfriend (now wife) Charlotte, I was sitting in the Student Center flipping through the pages of the class catalog. Words jumped out at me as I skimmed and I saw the word “Cartooning” jump out at me. I flipped back and saw the Graphic Design degree. “What is this?” I wondered. Sheltered, pre-internet, I had never given any thought to it as a possible career. Suddenly, a light went off in my head- I could DESIGN my games and do it for a living!

My original intent faded as I was introduced to a whole new world of artistic opportunity. Fast forward a few years after school- it was very hard to break into the industry pre-internet. I had toyed around with going to Kubert Cartooning School- but I talked myself out of it. I wish I hadn’t… but in retrospect, I lacked conviction. That is a story for another time, though. I did have an experience at self-publishing a comic book, but that fell apart as my creative partner had too many personal problems. We went our separate ways, but it soured the taste of comic creation… well, I guess even to this day. Again, lack of conviction compounded by sour experiences- I just never followed that path to any satisfaction.

Post college, my first few jobs were horrible- a small print shop which lasted a month, and a family owned phone-book publishing company that was worse.  That one lasted a year and met one of my future best friends there. Those jobs paved the way for my decade-long stint in broadcast television… which led to my current job in multimedia in higher education.

And I’ve tried all sort of exploration into different types of artistic expression: animation, illustration, comic books, narrative writing, filmmaking… but never much into what I originally intended to do: game design. I had played around, and even attempted a card game a couple of years ago with a friend I had met at one of my jobs. It was a simple card game based on a rummy run, the first to create their 10 card run won.

Well, we had different intents on that game- I wanted a simple quick competitive game and he and his family liked more strategic, cooperative games. While that endeavor fizzled out, it did give me some insight into how much gaming had evolved- I had been out of it for so long.

Back and forth again. Work, family, home, occasional creative experimentation… I even thought about developing my writing talents and becoming an author. Still on the list of possibilities, but being visual, and I do enjoy drawing… and the complex abstraction of figuring out game mechanics.

And so here we are- a meandering full circle. It’s been now nearly 30 years since I started designing games, and a 17 hear hiatus between letting it go and a failed start… now back to full on design again.

I’ve learned many lessons in my most recent attempt, and have played some other games with other friends. I have started a new pulp-adventure table top game that can be both cooperative and competitive, depending on your strategy. I have a playtest version ready to go- I’ve roughly illustrated a deck of cards to emulate the playing experience. It’s helping me brush up on my illustration and graphic design skills- because it needs to look as amazing as it is in my head. I've even went and opened a new Instagram account @lostskies7 to show how that's going.

It’s all coming together- all of my experiences. I always thought I had wandered off my path, but I was really adding to my repertoire of skills and building experiences. It’s a bit of uncharted territory for me, though… but exploring it is what is exciting.