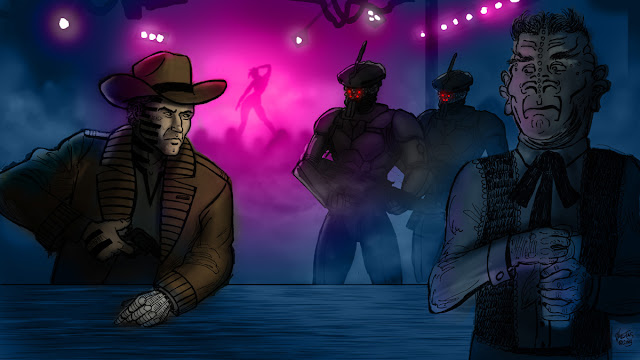 My next entry for Comicvine's Artist Showoff Character Creation contest #64- A Space Western! There's actually three different characters. It's not as painterly as I wanted it- but that will take practice. Actually, this is the first "finished" illustration I've done in a long time that depicts an actual situation, and not a pinup. Special shoutout to my buddy Mark Green for giving me some reference poses- it really helped put this illustration together on such a limited time.

Here's the descriptor I used on Comicvine:

Cal 10862 had narrowly escaped the slave camps on Epsilon Alpha IV, losing his arm along the way. He's since become the fastest draw this side of the Orion Frontier. But while the gunfighter's reputation has earned him many jobs, it's also earned him a spot on the Imperium's Ten Most Wanted list!

Now on to the next contest: Medusa!
illustration