Looking up from my work stupor 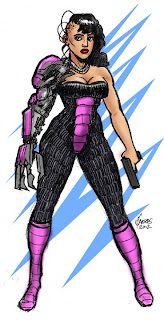 Hey all, it's been far too long. I have been busy busy busy- mostly with freelance, and then some projects that have arisen while others have been shelved. The creative process is frustrating, but a big part of the chaos is simply a matter of survival. Cryptic? Yes. To sum up, it's been a matter of working to pay the bills.

I haven't had a chance to work on the Kubert Correspondence Course I spent $300 on. I don't want that to go to waste, so I need to get my butt in gear. With Joe Kubert's passing, it's been hard for me to get motivated- I took it as hard as any who admired him, and only feel the deepest condolences for his family.

That said, with old man winter peeking around the corner, I've been trying to work out some projects that I can shoehorn into my tumultuous schedule.

I met a fantastic artist online by the name of Robert Schaupp- really nice guy that possesses an incredible talent. Check out his Comic Vine Gallery and you'll readily agree with me. He had inspired me to use the forums to 'work out' in the artistic gym to pump up those creative and drawing muscles. I did one contest, with my entry which is pictured here- ATOMA: Cyberpunk Angel of Death.

I've was drawing quite a bit, then abruptly stopped, but I have some illustrations planned for a personal project that's been shelved for a while. I am in the process of getting it protected legally, but once all the i's are crossed and the t's are dotted, you won't be able to get me to shut up about it.
illustration