- August 10, 2019
A few days ago, I had a long conversation with my day job manager, Marc, who is also my mentor and friend. Our chat went to discussing those who we would consider our personal Nemesis. His was a narcissistic old professor he had while he was in college. The dude sounded like a real deuchbag, but Marc persevered. Mine, no less deuchy, was a former friend and business partner from ages (read 'DECADES') ago.

We both got worked up as old memories surfaced and we told our war stories of betrayal and disgust. It's easy for old wounds to open up especially when they're so deep as they happened so young. After our chat, the rekindling of old anger dredged up the motivation to work on some projects. Applying salt to an old wound is not healthy, but it is effective.

However, the poison faded quickly- the thought of drinking in more toxic memories to feel powerful conjured many a cautionary tale. They ARE old wounds, but they HAD HEALED. My former acquaintance had actually given me a gift in the form of a life-long lesson: he serves as a template as a type to avoid. It has worked time and time again... and come to think of it, as recently as six months ago.

Would I ever want to be a friend of this "old Nemesis" again?

He had contacted me ten years ago and I tried, but I walked right into the same vat of manipulation and abuse. I doubt he's changed. I'm certain it's been played over a million times as he presents himself as a victim- most narcissists do. But, while I'm not "over it" (and likely will never be), the vigor of old wounds has faded. I can talk about it freely now without the sting- and that is indeed positive.

Still, it serves as a way to stimulate the creative process. Creative acts pull from personal experiences, and I used those feelings constructively. It provided energy to kickstart productivity- and served me well when I filled a dozen pages in my sketchbook last night. By 9pm, I was mentally and physically exhausted.

I have the opportunity to help with a new video project- a docuseries that will involve travel throughout the outback of the intermountain west. I had taken on this project because I love adventure and for the same reason I tapped into old angst—experiences are the truest building blocks to create something new.

Popular posts from this blog

Recently, an incident shook the complacency from my life. I…
Read more 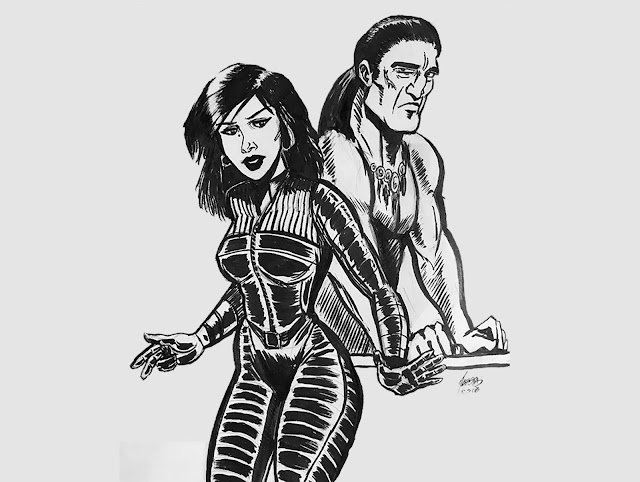 I have been using a Faber-Castell PITT artist pen, soft brush #199. I love it. The point is fine, the bristles are soft. The ink is dark. And I found it at Michael’s for only $5.

I’d rather ink with a brush, but it’s a messy affair- and clean-up is brutal. With a brush pen, you get the experience. However, it’s water soluble ink… meaning that it’s not waterproof and erasers pick up the ink when you try to rub out pencil lines.

I had been teaching myself how to ink for years. I was trying to develop my confidence as nervousness leads to shaky results.

One way to gain confidence is to draw with a ball point pen: I filled up an entire small sketch book with hundreds of messy pen drawings. As I was feeling more confident, I moved on to crowquill. I would also use india ink mechanical pens, but you get no flexibility in the line.

It’s been a few years of on/off use, and you’ve seen me post some stuff before. Now that Jake Parker has released the Inktober 2018 list (here’s a print friendly…
Read more