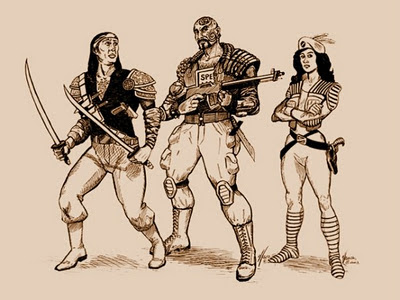 Wikipedia has a pretty good definition of concept art: "Concept art is a form of illustration where the main goal is to convey a visual representation of a design, idea, and/or mood for use in films, video games, animation, or comic books before it is put into the final product. Concept art is also referred to as visual development and/or concept design. This term can also be applied to retail design, set design, fashion design and architectural design."

The level of concept art depends on how much a specific idea needs to be created and produced. This can be as simple as a color palette and wardrobe ideas, to dressing a room, to creating vehicles, props and prosethics. Sci fi and fantasy genres will more than likely have more concept art designs than a modern day drama.

As always, it's best to have a finished script so you know what you need to design.  There needs to be a visual breakdown of each scene, each shot, and everything that will need to be created for use.  This can be anything from specific specialized props, costumes, characters, vehicles, building, etc etc etc.  Everything needs to be created if it's not bought off the shelf.

Of course, Concept Art is used other than film. It's heavily used in video games, comic books, etc.  Here is an example of characters for Jason Anderson's Role Playing Game "SoulChasers":

The above example is far more refined than what you'd typically use when you're conceptualizing something- it's more akin to production art.  Concept art should be more rough- to get a point across.

For Archangel Alpha, I created early concepts for the "Alphas", as well as some other vehicles. Here are some thumbs and design notes:

For Two Sides of the Moon, I created a possible idea on what the Skinwalker could look like:

For dramas, it's often a good idea to design wardrobe and makeup for a consistent look, even if it's as simple as photographing the actors with wardrobe changes.  On American Junkie, a drama about drug abuse and teen pregnancy, I created some basic wardrobe suggestions before they cast anyone:

For James Cawley's Bigfoot short, I created refined thumbs for to give direction to their FX artist:

There are a ton of resources for the concept artist- conceptart.org is one of the largest.Or simply google Concept Art tutorials.

However, it's okay to be inspired by another piece of art and to run and make it into your own- but it's NEVER okay to flat out plagerize it.

What do you think?