on October 23, 2008
Editing on Oisin has been slow but steady... things have been extremely hectic lately and I've been interrupted quite a bit, so it's made it challenging.

Salt of the Earth is on hold until I can finish Oisin, but I found some concept images I had created that I was originally planning on using at the beginning of the short. The idea was to have a flying car fly down and into the city: 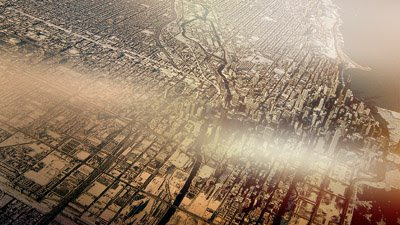 than behind this statue: 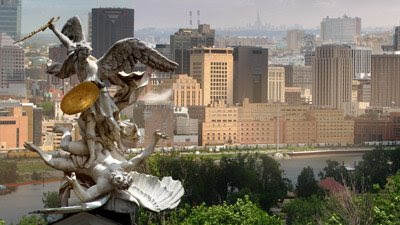 than over a building which we use in our establishing shot, where it tilts down showing Yolanda Arrey having her morning breakfast at a sidewalk cafe. But it didn't seem convincing to me and we don't have flying cars in any other part of this short (they are a part of the story's world, but we found they're expensive to rent) so I decided on a more sinister approach to the beginning- which I have been storyboarding out.

Because of our rickety economy, I've decided to turn one of the three future shorts I had for the Unreleased-Named-Future-Noir-Feature-project into a web comic. Don't get me wrong, I am not taking an easier path by doing a web comic- they are very time consuming and tough; I'm trading in hundreds of phone calls for arrangements for hundreds of hours cramping up my drawing hand... not that I'm complaining :)

But in all reality, the main reason is the season- the future noir shorts take place during warmer weather... so it's a wait until spring time to get those going again, and I'll be doing something over the Winter in the meantime.
filmmaking illustration resourcefulness