The Center of My Mind's Eye 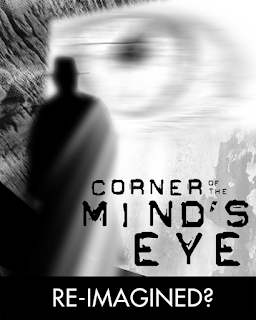 Author's note: originally written in 2006.
I’ve been working on a post-steampunk (steampunk without the Victorian tropes) novel for a few months. I’ve found some fantastic people who have been great at workshopping my story with me; listening to my rambles as I try to figure out the tone and plot of my post-apocalyptic story world.

As such, I’ve been helping some of these friends with their creative endeavors. One thing I’m particularly excited about is that I’ve come up with some ideas for a music video for my very talented friend, Libby Lenan. The flood gates of creativity have opened. While looking at ways I could shoot this no-budget video, I had been looking into some incredible work by skilled artisans of iPhone cinematography, and have become flooded with ideas on how to improve many old scripts and resurrecting old projects like “Corner of the Mind’s Eye”.

Of ALL the film projects I wish I had finished, Corner of the Mind’s Eye is the closest to my heart.

I could rant about why it folded to begin with… but it came down to two things: MY lack of skill, reliance on someone else to provide that skill and equipment. I was at the mercy of their agenda. However, I learned the most valuable lesson of my career: become technical and hone the craft. Perhaps this notion of making a film by relying on visual craft and using an iPhone to shoot it, Corner of the Mind’s Eye’s re-imagining could happen.

It has come back full circle. Because of my new ideas, I’ve gained ground against creative block afflicting my steampunk novel.

Last summer, I decided to let my creativity ‘free-flow’… which means seizing and acting on inspiration, and refusing to stop up imaginative flow— to do so stifles that creativity.
film inspiration resourcefulness writing