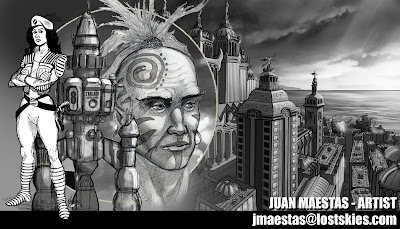 Shame on me for not posting more frequently! I have many reasons- life in general has been a whirlwind of excitement and challenges, and I've been honestly working towards reshaping my professional future.

All of that said, you might have noticed that the lostskies.com site is down. The main reason is because I failed to update my credit card on file and my space was reset by the time I went to pay again. Totally my fault, but it is an opportunity to rethink exactly what Lost Skies is all about.

When I came up with the name Lost Skies, I meant it to be a synonym for Alien Horizons, the skies of other worlds and realities, or it's sister idea- the notion of a Lost Worlds. So, using "Lost Skies" felt original enough to invoke that feeling... I fear it might have been a bit too esoteric a term. I've sometimes even referred to the entire tomb of my work as "Tales from the Lost Skies", and that still holds true. Still, Lost Skies doesn't exactly roll of the tongue easily. I've owned this domain and created many works under the Lost Skies banner for eight- going on nine- years.

But as all things begin, they should also evolve. I've never really liked the negative connotation that comes from the word "lost". Lost in my own thought, lost in direction, lost in process. Lost can mean confusion and certainly losing something can be bad. We are scared of losing money, opportunities, and loved ones. I've had many losses this past year, including my father. Though not an animal, the implied spirit of "Lost Skies" became sort of my talisman- more so a state of mind. Unfortunately, it began to overshadow the original mission of the idea.

So, I'm changing it up. Lost Skies will always be an endearing part of my creative evolution, but it really only was the chrysalis of my evolving work. I'm still a bit away from unfurling the new banner for the world to see, but just know that Lost Skies is in the December of it's years. Fitting that I say this on Christmas Eve.

So what's on the new horizon, you ask?

I've taken inventory of how many unfinished stories I have set out to write. I love to write. I've always used it as a vehicle to showcase my artwork or filmmaking. I've written three finished screenplays, as well as a number of pilot episodes for television series, Roleplaying games, comicbook and webcomic ideas, and even a few cardgames. They're all buried under the potential weight of start up costs among other attempts of jumpstarts and obsticals. I never could quite figure out how to go about things and so I just went for it, and met may fantastic people along the way. I realized as I was making a list of all the story worlds I had created, I have a lifetime's worth of work ahead of me.

SO the real problem is that I have so many ideas, where do I start? That's not a bad problem... I'm grateful God has blessed me with an active imagination. Now it's time to hone it into a razor-sharp focus and get things done. 2014 will see these changes come to fruition.

So, Merry Christmas and have a fantastic New Year. My gift to you is this amazing video I found that has really made me realize the way my father lived is the way I should be living. Take care!


What is a Warrior? from notthisbody on Vimeo.
inspiration Lost Skies